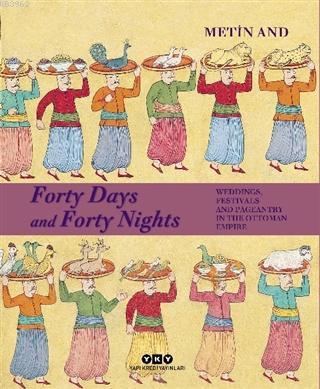 Having dedicated his whole life to the study of virtually every type of Turkish performing art, Metin And found a wealth of material in Ottoman festivals. From the 1950s onwards, his constantly evolving research gave its fruits in articles and books; had he lived a little longer, long enough to reflect his latest discoveries and findings, he would have transformed this topic into a true 'festival ground'.

Forty Days and Forty Nights is not only a great book title, but it also refers to fairy tales, which are the pinnacles of oral culture. For forty days and forty nights, protagonists struggle on journeys, their suffering, trials and tribulations destined to remain hidden; for forty days and forty nights they celebrate weddings whose details are left to the listener's imagination. Festivals enhanced by stories told as though they had taken place but yesterday, as though nothing had moved, not even by an inch, also relate the true story of a civilisation.

Metin And regards Ottoman festivals as an intersection of the arts; Forty Days and Forty Nights also contains his earlier, constructive suggestions for art historians. It was he who first ventured onto this path and persevered on it; his extraordinary efforts and intuition guide the reader as the trail he blazed invites further study.